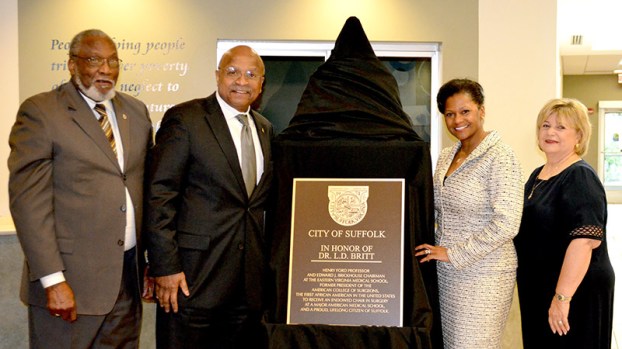 One of Suffolk’s greats was applauded on Saturday for his long and storied career by friends, family and colleagues.

Dr. L.D. Britt witnessed the unveiling of a plaque at the Health and Human Services building on Hall Avenue on Saturday. The plaque highlights Britt’s many accomplishments in medicine that were applauded by city officials and medical professionals in attendance.

“I’m overwhelmed,” Britt said. “I never expected any signage for me. I really appreciate it.”

Two of the plaques will be displayed at the entrance of the Health and Human Services building to honor his accomplishments in a place that serves his fellow citizens.

Britt is a general and acute care surgeon and chair of the Department of Surgery at Eastern Virginia Medical School in Norfolk. He’s a proud native of Suffolk, where he was valedictorian of his Booker T. Washington High School graduating class.

He left home for the University of Virginia, where he became a member of the Raven Society, the university’s oldest and most prestigious society. He’s also a graduate of both Harvard Medical School and Harvard School of Public Health and has also received honorary doctorates conferred by Tuskegee and Norfolk State universities.

He came back to Suffolk two decades after leaving for UVA at the protest of colleagues who said it would terrible for his career. But Britt was not deterred.

“I just wanted to be of value to my family and to my city,” Britt said.

On Oct. 1, 2016, Britt was the first and only EVMS faculty member elected to the National Academy of Medicine, one of the highest honors in the field of health and medicine with only about 2,000 members.

“It’s like the Hall of Fame in sports,” Britt told the Suffolk News-Herald in 2016. “There’s people that never got in that probably should have been in.”

He has also been president of the Southern Surgical, Southeastern Surgical Congress, American Association for the Surgery of Trauma, Halsted Society and Society of Surgical Chairs.

“He works so hard and he’s so selfless,” said Dr. Charlene Britt, his wife. “He’s the definition of what you want your doctor to be.”

Britt said he took after Capt. Hernán Cortés when he landed his ships in Veracruz in 1519. Cortés ordered his men to burn all their boats so as to motivate them to victory and remove the possibility of fleeing.

Britt said he had the same sink-or-swim feeling when he came back to Suffolk.

News-Herald to move to temporary office

City bruised by tornadoes, but cleaning up

‘This is our Super Bowl’

Dominion: Outage may continue through Thursday

Thousands remain in the dark after Isaias