Kennedy back on professional stage

Kennedy Stone is living out her dream as a senior in high school as she gets ready to start a three-city tour with the Virginia Opera Company this Friday.

Kennedy, 17, is a senior at King’s Fork High School and a student at The Governor’s School for the Arts, and she is getting her second shot at the big stage in the cast of Kurt Weill’s “Street Scene.” She was previously in “A Midsummer Night’s Dream.”

The excitement of getting a role was more than Kennedy could fathom, and she was pleased to have a second chance to show the Virginia Opera Company her passion and commitment to the art form.

“I don’t even know how to describe it. I got an email and it said, ‘Congratulations you’ve been cast,’ and I was really excited they gave me a second opportunity,” Kennedy said. “They trusted me enough and I had proven myself enough for the second time.” 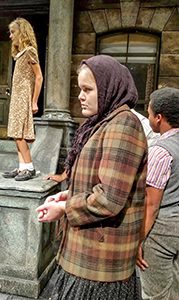 Kennedy Stone, 17, rehearses for with the Virginia Opera Company for their production of Kurt Weill’s “Street Scene” at the Harrison Opera House. Kennedy will travel to three different cities for the production. (Submitted Photo)

Both opportunities came from being enrolled at the Governor’s School, because the school has a strong relationship with the opera company.

Kennedy and her classmates auditioned in the comfort of their art school, and they got to do so in front of the opera’s conductor, Adam Turner.

“Adam Turner personally called and told them that he wanted a few kids from the Governor’s School, and we auditioned and sang in front of him,” Kennedy said.

Only eight students from Hampton Roads were given the opportunity to join the opera company’s show, and Kennedy was the only student from Suffolk.

“It’s just incredible, and I can’t say enough just how proud I am of her,” said her mother, Dottie Stone. “The more I delve into the world of opera, the more respect I have for their craft.”

Opera is new for her family, but it also relatively new for Kennedy as well.

The high school senior has been singing for quite some time and even when she started to get more serious about it, opera was never in the front of her mind.

“I really started singing in seventh and eighth grade,” Kennedy said. “My mom told me about the Governor’s School and I auditioned, but I didn’t know I was going to do opera until I got in.”

Her interest and passion for the craft grew under the tutelage of her teacher, Alan Fischer.

“He shows us everything we need to know in his classes and about opera and what is behind the scenes in opera. If it wasn’t for him, I wouldn’t be interested,” Kennedy said.

With her second professional opera show on her resume, she is excited for her future as an artist. Kennedy plans on applying to colleges to study vocal performance with her sights set on The Hartt School at the University of Hartford. The school is a comprehensive performing arts conservatory.

Her top choice in Virginia is Virginia Commonwealth University.

She has specific schools in mind, but the professional world is uncertain for her. Kennedy doesn’t want to pick just one opera company to be a part of, because she believes it would limit her chances of being successful as a professional.

“You want to keep your options open and don’t settle on just one place. There are so many good people or people better than you, so there is no guarantee,” Kennedy said. “You have to make sure to audition as much as you can, and eventually you’ll find a place where you’ll be treated well there.”

The show will begin at 8 p.m. Friday at the Harrison Opera House, and the show will be there for three nights before traveling to Fairfax and Richmond.

More information and tickets can be found at vaopera.org.