Georgia Southern University recently recognized approximately 3,300 students on the Fall 2018 Dean’s List. Ana Lanier, of Suffolk, has been named to the list for excellence in academics. To be eligible for the Dean’s List, a student must have at least a 3.5 grade point average and carry a minimum of 12 hours for the semester.

Alexis Brown, of Suffolk, earned a place on the Fall 2018 Dean’s List at Mary Baldwin University. To be eligible, a student must have a grade point average of 3.5 to 3.74, be a degree candidate, and have earned at least 12 semester hours for the grading period.

Rivers participates in Caring for Kindergartners

Upon completing the book “How Full Is Your Bucket?” the young students were able to put the lessons they learned on display by drawing pictures and creating their own greeting cards to be distributed to elderly, homebound citizens throughout Horry County.

CCU has 19 intercollegiate athletic programs and competes on the Division I level as part of the Sun Belt conference.

Alpha Lambda Delta is an honor society founded in 1924 to recognize outstanding first-year students. Students must have a 3.5 grade-point average or higher and be in the top 20 percent in their class to be considered for membership.

Benjamin Morgan was inducted into Omicron Delta Kappa, the national leadership honor society for college men and women, at Hampden-Sydney College on March 24. The Lambda Circle of ODK was established at Hampden-Sydney in 1924, and membership is a mark of highest distinction and honor. Selection of members is based on their influence as campus leaders to better campus life and to encourage high standards in all activities.
Morgan is the son of Daniel and Rachelle Morgan, of Suffolk. He is a Patrick Henry Scholar and recipient of the Samuel S. Jones Phi Beta Kappa Award for overall Academic Excellence. He is a Student Court Advisor, Writing Center Tutor, Resident Advisor, member of the Ethics Bowl team, and a member of the President’s Men.

The following local residents were recently initiated into The Honor Society of Phi Kappa Phi, the nation’s oldest and most selective all-discipline collegiate honor society.

Brandon Adams, of Suffolk, was initiated at Radford University.

Krystal Clanton, of Suffolk, was initiated at University of Maryland University College.

These residents are among approximately 30,000 students, faculty, professional staff and alumni to be initiated into Phi Kappa Phi each year. Membership is by invitation only and requires nomination and approval by a chapter. Only the top 10 percent of seniors and 7.5 percent of juniors are eligible for membership. Graduate students in the top 10 percent of the number of candidates for graduate degrees may also qualify, as do faculty, professional staff and alumni who have achieved scholarly distinction. 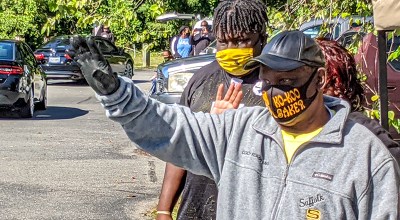 NAACP asks Isle of Wight’s top prosecutor to recuse herself

Suffolk poet reflects on past trauma