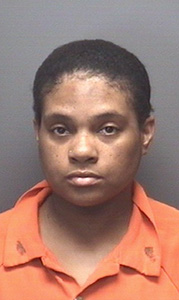 Suffolk Police have charged a second person in a May 10 case that involved the stabbing of two police officers and two citizens.

Shanitta Nicole Cuffee, 33, of Suffolk, is charged with reckless care for a child, cruelty and injuries to children, assault and battery of a law enforcement officer, obstruction of justice and three counts of accessory after the fact in an attempted homicide, according to a city press release.

The stabbing happened on the evening of May 10, when officers responded to the 100 block of Ashford Drive to serve an emergency custody order, the press release stated. The adult male subject pulled a knife and attacked the four victims.

One officer and the two citizens were treated and released from a local hospital, but one officer remained hospitalized for several days.

Travis Dionne Butler, 39, is also charged in the stabbing.