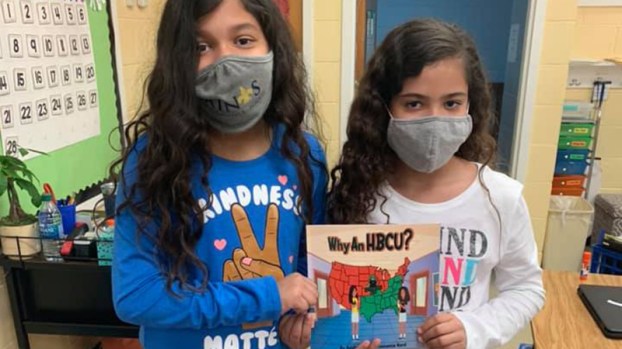 For Black History Month, Madison and Morgan Ward read to their third-grade class at Nansemond Suffolk Academy “Why an HBCU?” which was co-authored by their mother, Dr. Kawanna Ward, and her sorority sister, Ayisha Mumin.(submitted photo)

A new book has been published to teach kids about HBCUs.

“Why an HBCU?” is a children’s book written by Suffolk author Dr. Kawanna Ward and her sorority sister, Ayisha Mumin. They are both part of Alpha Kappa Alpha from Norfolk State University.

HBCUs are historically Black colleges and universities. These are schools that were founded before 1964 that were for Blacks only. There are still 101 that still hold their accreditation in 19 states — and they are listed as a helpful resource in the back of the book.

“This book was written to encourage conversations about HBCUs,” said Ward. “Many produce quality leaders in their community, but the graduate school is usually the only school recognized.”

The book came after a conversation when Ward explained HBCUs to her daughters. Ward and Mumin took the conversation and turned it into a picture book to explain to children the rich legacies and accomplishments of HBCUs and historically Black fraternities and sororities like the Divine 9.

Life imitated art as Madison and Morgan Ward, Kawanna Ward’s twin daughters, took the book to their third-grade-class at Nansemond Suffolk Academy to teach their class about HBCUs for Black History Month just like their characters in the book.

“We are looking at where HBCU dreams begin,” said Mumin. “We want to educate young people that HBCUs are still a viable option that are now open to everyone.”

The book was published through Steposaurus Kids, a company started by Ward, Mumin and their friend, Eddie Singleton, in February 2021. The company is an “edutainment” brand that teaches kids about HBCUs’ legacies and accomplishments in a fun way. The name came from Mumin’s three-year-old daughter, Asha, who heard the historically Black greek sorority and fraternity song that goes, “step, step, soul-stepping sorors (brothers)” and sang her own version “step, step, oh steposaurus” with her toy dinosaur.

“It was just so catchy for kids, and they love dinosaurs,” said Ward. “We made Steposaurus our mascot that has a Sigma in his name that he wears on his shirt. It’s a Greek letter used in math, and it represents the sum of our love, admiration and respect for all HBCUs.”

The website also focuses on kids today to encourage them with the “Celebrating Excellence” tab, where students can be sponsored for recognition for their community service and academic excellence. The site not only focuses on the historical past of HBCUs but also the promising future students.

According to Mumin, HBCUs and the Divine 9 are getting more recognition as a graduate of one and a member of Alpha Kappa Alpha has made a notable historic breakthrough.

“There’s been a lot of energy for HBCUs and the Divine 9 ever since Kamala Haris became not only the first female vice president but the first to graduate from a HBCU and part of a Divine 9 sorority,” said Mumin. “She has acknowledged Howard University in speeches, where she went to school and is the founding school of Alpha Kappa Alpha.”

To find out more about Steposaurus Kids, take virtual tours of HBCUs across the country and buy “Why an HBCU?”, visit steposauruskids.com.