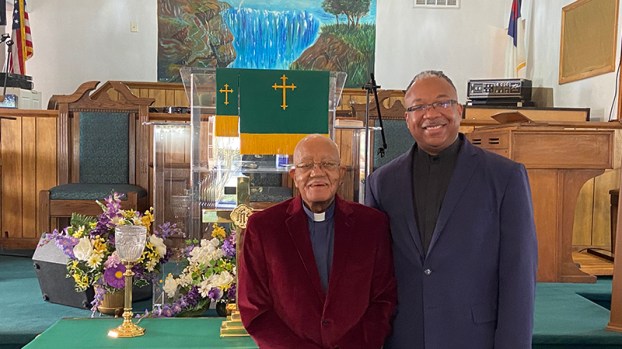 Greater Sweet Beulah Apostolic Church is putting together a biography of the church’s history.

The biography is called “Greater Sweet Beulah Apostolic Church Black History Book.” It will cover the church’s history, Bishop Dr. Madison Copeland, a memorial for past members and notable events throughout the years.

Greater Sweet Beulah Apostolic Church was established in 1934. Copeland, who attended the church as a child, remembers the early days of members getting baptized in Pitchkettle Creek. Long-time members of the church, Pearline Carroll and Elder Dr. Rosie Carney, can still remember the old wood-burning and, later, kerosene heaters that would heat the church during the winter.

One memorable moment was when gospel singer Shirley Caesar sang at the church in the 1940s. This made Greater Sweet Beulah Apostolic Church the first church in Virginia she sang.

“She was very young when she came,” said Carney. “I remember everyone called her Little Shirley. We would hear her on the radio and my mom would be like, ‘that’s Little Shirley.’”

The church has faced many changes in its 87 years, including changing from Trinitarian to Oneness Pentecostal. However, one attribute of the church that has kept it going for so long is the loving atmosphere from its members.

“This church was built on love,” said Copeland.

The book will also talk about Copeland, who will celebrate 59 years of preaching at Greater Sweet Beulah on March 18. He grew up in the church and then returned to preach in 1962 and has been there since. He rebuilt the church in 1966 and rededicated it. Copeland said he has preached for 75 years, since he would take his Bible to school with him and preach during recess.

“He is still going strong,” said Carney, who is putting the book together.

Copeland has been a great mentor in the neighborhoods and is well known throughout Suffolk. He has two biological sons, several adopted children and a host of spiritual children.

According to Elder Keithston E. Ferguson, who recently joined Greater Sweet Beulah Apostolic in 2019 as assistant pastor, Copeland is regularly asked to preach at churches and funerals.

“Pre-COVID, he was a man on a tour up and down the coast,” he said. “He is in high demand due to his energetic style and wisdom.”

Another section of the book includes memorials for members who have passed away. Many have sent in pictures and a short write-up about a loved one who was involved at Greater Sweet Beulah Apostolic.

“It’s important to tell the stories of those who have gone to be an encouragement to the younger generations,” said Ferguson. “They lived through some difficult times like the Great Depression, World War II and the Civil Rights Movement.”

The book was meant to be done in time for Black History Month, but the pandemic has slowed down the process, as more entries are still coming in. As Carney said, it does not matter, since “Black History Month is every month, and Black history is American history.” The book will be available to the public for a $5 donation.

More contributions for the book are still gladly accepted. Anyone who wants to contribute a small picture and a 25-word write-up can mail it to Greater Sweet Beulah Church, P.O. Box 977 Suffolk or email it to greatersweetbeulah.apostolic@gmail.com. Pictures will be returned.