J.M. Smucker has announced that it will close and sell its Suffolk coffee manufacturing facility next spring.

The inconspicuous announcement came at the end of a news release that had outlined the company’s strategic partnership with JDE Peet’s to support its Away from Home liquid coffee business with product development, production and foodservice equipment innovation.

In what the company said was a related decision, it announced plans to close in spring 2022 and sell the 20-acre facility on Progress Road in the Wilroy Industrial Park, which it bought in 2012 for about $15.5 million from Sara Lee.

The company said about 80 employees would be affected when it stops production at the Suffolk manufacturing facility.

“We will support these employees through their planned transition, including encouraging them to explore other open roles across the organization,” said J.M. Smucker spokesman Frank Cirillo in a statement.

Greg Byrd, the city’s interim economic development director, said the company had notified the city of its plans for the facility through Mayor Mike Duman.

“The city has been in contact with Smuckers to talk to them about the assistance we can provide for them when they’re ready on their workforce,” Byrd said. “Understanding that with that being a year out, it’s probably, really very early in the process for that.”

Byrd said that as the closure date gets closer, the city would have a better idea of how it can support J.M. Smucker.

In 2014, two years after Smuckers bought the facility, it announced a $4 million investment to increase production space by 13,000 square feet, which included $1 million in advanced warehousing and processing equipment. At that time, the company cited the city, the Port of Virginia and the state as being “the perfect mix” of what it needs to grow as a company and signified its commitment to the city.

Byrd acknowledged the impacts of the city losing J.M. Smucker.

“Their contribution to the ‘caffeine capital of Virginia’ goes away with that closure, and that’s not just a fun little saying we have. It represents an industry.

“The impact in that is, of course, the benefits in having that kind of manufacturer here in the city. To the extent that they are able to sell the facility, we look forward to a similar use in the future, simply because that’s a large facility. We’d love to see that use there.”

While he didn’t have a dollar value on the revenue J.M. Smucker brings to the city, Byrd said, “it represents a significant source of revenue in taxes — in real estate and equipment — to the city. So we certainly want to see that restored and back in operation as rapidly as is reasonably possible.”

He said the loss of the Smucker facility “can only be compared to replacing it with a new owner.”

Byrd did not know how the impending J.M. Smucker closure might impact the 58-acre, 175,000 square foot Peet manufacturing facility that was to go in the Virginia Port Logistics Park and bring with it 135 jobs, as it has been on hold since last year.

Peet’s made a big splash in December 2016 when company officials made the announcement with then-Gov. Terry McAuliffe among those in attendance. Byrd said the Peet’s facility was still on hold, and that none of the grants that it was to receive — a $1 million State Commonwealth’s Opportunity Fund grant and a $2.7 million package from the city’s Economic Development Authority to offer incentives in four phases based on performance — had been paid out.

“They have stayed in touch with us,” Byrd said. “They have paused that construction plan while they deal with other matters within the firm.”

He said with the infrastructure in place, “it is now, essentially, a pad-ready site, and they are addressing other company matters.” He did not have a timeline of when Peet’s might make a decision on its next steps with the site.

“I am cautiously optimistic that they plan to move forward,” Byrd said.

Massimo Zanetti’s 355,933 square-foot East Coast distribution center, which will support its corporate headquarters and main roasting operations also located in the city, is slated to open in the Virginia Port Logistics Park sometime this summer. 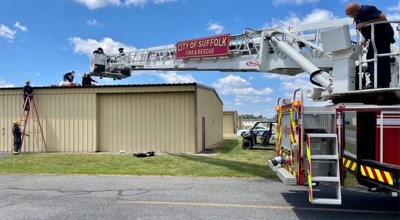