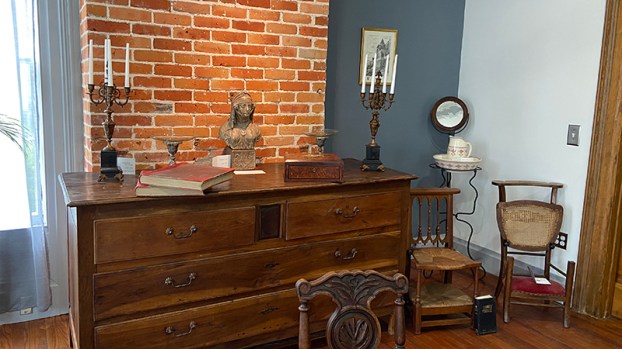 Residents of Suffolk can now have a piece of French history and culture in their homes without leaving the city.

The French Corner officially opened on May 30 at 133 Bank St. This store has handpicked antiques straight from France.

Odile Baderspach owns the store. Baderspach was born and spent most of her life in France where she met her husband, a United States citizen. She has moved with him back to America and decided to open up a French shop.

“There’s been big history between France and the U.S.,” said Baderspach. “Our countries have loved each other since Lafayette.”

Baderspach handpicks items for the store on her trips home to France. She keeps them in a storage unit there, and then when she is ready, she has items sent to sell at the store.

Some of the unique items include a dresser from the 18th century, modern Berger lamps, a wedding wardrobe from the early 1900s, a secretary from 1780, 19th-century Bergère armchairs with original upholstery, chairs from a castle from south France that has adjustable tension in the seat and an 18th-century clock that still works and has its key.

There are also dishes that The French Corner shared on its Facebook page with the history. These dishes have stamps on the bottom showing that they are from between 1860 and 1870. The dishes are the blue of Gien, France, where they were made.

“People love history and antiques and love to know the story of an object,” said Baderspach. “I wanted to bring something French and thought, let’s go with a French touch in a home.”

This shop has been years in the making after Baderspach and her husband remodeled the historic home where the shop is now located. They bought it three years ago from the Nansemond-Suffolk Historical Society, which has its headquarters in the Phillips-Dawson House next door. The house had sat empty for 40 years, meaning it needed many updates, including central air, plumbing and insulation. Being a historical building, during the remodeling Baderspach and her husband had to keep it as close to the original as possible while bringing it up to date.

“We tried to keep everything close to original,” said Baderspach.

They kept many original pieces, including the stairs, the windows, door frames, first-level floor and the exposed brick. Baderspach found the brick under layers of plaster and cleaned them to leave pieces exposed, giving a red accent to the gray walls.

With the remodel done and the store open, Baderspach hopes to hold events on different French holidays at the store.