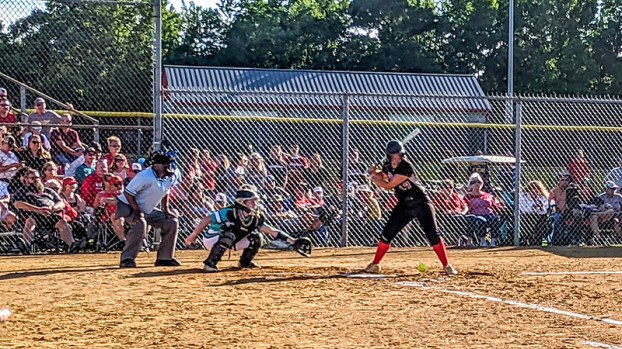 Though the biggest moment belonged to freshman Cammie Stuffel in Nansemond River’s 1-0 eight-inning win over Glen Allen in the Class 5 softball semifinals, senior pitcher Taylor Cherry set the stage with a stellar performance to keep the Lady Warriors even to that point.

Cherry, heading to Division I Elon next year, allowed just two hits and struck out 15 while snuffing out the Jaguars’ biggest threat in the second inning and matching zeroes with the Gatorade State Player of the Year Emerson Aiken.

But with Er’ron Burton on first with two outs in the bottom of the eighth following a fielder’s choice, the poised left-hand hitting Stuffel turned on an Aiken pitch and crushed it to the right-field corner. It allowed Burton, who was running on the pitch, to score standing up and set off a raucous celebration for the Warriors (14-1), who reached the state championship game for the first time since 1995. They will host Freedom of South Riding on Saturday.

“I knew she was stealing,” said Warriors coach Gabe Rogers of Burton. “The right fielder was playing so shallow and I don’t understand the depth at which they played, but I knew it was by her. She actually got to second and turned around and I had no idea why she was turning around, but she started going again. She’s fast and she scored.”

Cherry started the game strong, using her rise ball effectively to strike out the first two batters of the game before allowing a single and hitting a batter. She struck out the next batter to end the threat.

In the second inning, she allowed a leadoff double to Taylor Cochrane, who reached third with one out. But Cherry got a pair of strikeouts to end the inning.

From there, Cherry retired 21 of the final 22 batters, allowing just a walk to Cochrane in the fourth before getting the final 13 outs, though Rogers expressed concern about a possible blister on her finger around the seventh inning.

“That’s what we’ve come to expect out of her,” said Rogers of Cherry, who threw a perfect game in the Class 5A semifinals. “And as you can see, she did not disappoint. She wasn’t perfect, but she was perfect enough for us.”

Nansemond River had a challenge at the plate against Aiken, heading to the University of Michigan next year.

Aiken, who struck out 14, kept a no-hitter — allowing just two baserunners on a walk and an error — until Paige Breneman singled in the bottom of the seventh.

“We know that Glen Allen’s pitcher was dealing and we know that their defense was solid, so we knew it was going to be one of those games,” Cherry said.

The Warriors nearly ended the game in that seventh inning.

After Breneman reached base, Shelby Knaak’s sacrifice bunt moved her to third. It set the stage for a dramatic end to the inning, but not the game.

Abby Lockhart bunted in front of Aiken, who threw out Breneman darting for home.

Rogers said he didn’t want Breneman to run on the play unless Aiken threw to first, and if she held the ball, then have Lockhart get into a rundown between first and second to try and draw a throw.

Instead, Breneman, with a slight hesitation, sprinted home, dived headfirst and was tagged out by Glen Allen catcher Sam Horn, who then threw out Lockhart as she was trying to get to second.

But after Cherry induced the Jaguars into pair of strikeouts and a popout in the top of the eighth, the Warriors got another chance in the bottom of the inning, with Burton reaching on a fielder’s choice and then was attempting to steal when Stuffel hit the ball over the shallow-placed right fielder.

It gives the Warriors a few more days together and time to prepare for a state championship game in a year following a suspended season due to COVID-19.

“The hard work that we put in the offseason is finally showing,” Cherry said. “We worked our butts off all offseason. It’s finally coming to light.”

An emotional Rogers said he loves this team not just for who they are on the field, but because they are “phenomenal young adults.”

“It’s a special team,” Rogers said. “We were devastated last year. We were absolutely devastated. We knew we had a really good team last year, and we felt like it was taken away from us.

“It would have been pretty much almost all the same girls and when they finally made the decision that we were going to play a season, even though it was abbreviated, we were excited. These girls do not play this game for themselves. They play for one another, and it is a special group of girls. To have this season and to make it this far, it’s just special.”